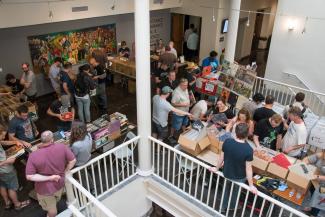 Here's a list (in alphabetical order) of what stores in New Orleans are doing what, with a few others in neighboring areas. Assume that all locations are first-come-first-serve (no holding RSD items) and only allow one of each RSD item per customer unless specified otherwise. Phone numbers are listed in case you want to check on a certain item. The RSD option pretains to whether they've signed the Record Store Day pledge and are getting a whole lot of those special releases.

Shortly after I first released this, my friend Alex Woodward made a similar article for The Gambit, worth checking out!

Captain's Vinyl doesn't have RSD stock, but they'll be doing a 20% off sale all day. Also, with your purchase you get a free beer and 20% off at the newly opened Craft Beer Reserve down the street!

Joey Buttons, Mr. Obscura himself, says his plans for RSD are "absolutely nothing". Still worth dropping by, especially if you're visiting NOLA Mix as well.

Euclid tends to be the hotspot for Record Store Day. They order boatloads of RSD material exclusives. They always make a big event out of it, and this year it even extends to SUNDAY! Live bands throughout both days. Includes a visit from "watch me eat a hot dog" (I have no idea what that means but I am intrigued). Free beer, free food. They're actually opening at 10am instead of their normal 11am.

I'm only listing this because of lot of people didn't know: Jim Russell's has been closed for good for a few months now. If you're nearby, check out Disko Obscura or NOLA Mix instead.

LMF is stocking official record store day merch. I've always thought they're an underrated location for RSD. They don't order a ton, but not too many are lining up at their door either. They'll have three bands performing in the afternoon.

A warning: The Mushroom tends to open early on Record Store Day. That's probably a good thing, but I've definitely gotten there at 10am and found that the thing I'd looking for had already been grabbed. Every year they have their birthday sale around 4/20... that starts on Monday this year.

This is NOLA Mix's first Record Store Day and they intend to do it right. In addition to official RSD releases, they have a food truck, free beer (in limited supply) and DJs spinning all day.

Peaches usually orders a pretty good amount of RSD stuff and is one of the first ones to open. Keep in mind that they have moved! They have "treats" from Not Your Father's Root Beer and will have giveaways from Skullcandy headphones and tickets from Winter Circle Productions.

Sisters in Christ have carved out a nice niche for themselves uptown. They've only just recently moved out of Gasa Gasa and into a new location on Magazine St. This is also the first time they'll be stocking RSD exclusives. Speaking of exclusives, they'll have a 7" by local punk group PEARS exclusive to the store (Thanks to The Gambit for filling me on that one)

Skully'z always carries about as much RSD material as they can possibly fit into their tiny store. They also open pretty early, always a nice option for Record Store Day, though there's usually a pretty good line as well. They'll have some House of Blues ticket giveaways throughout the day.

Atomic Pop Shop will start handing out numbers to get in at 7am, then will open doors at 9am. They'll have several live bands during the day and a storewide sale, then another show at 9pm.

This is Capital City's second Record Store Day, though I didn't get a chance to check out their first. They'll open at 9am and will have several giveaways

Lagniappe Records moved to Lafayette a little while ago, and the new store is NICE! They'll have free beer from Bayou Teche and a food truck outside as well as a DJ.

Mobile Records is a mainstay at the Record Raids, so if you're anywhere near Mobile make sure to check out the brick & mortar - it's even better than the table version!

I just got word from Kent that he is closing up Retro Music Co for good, won't even be open for Record Store Day. A bummer for sure.